This series of conferences aim to establish a network of art and cultural promotion led by corporations in Southeast Asian countries and Japan, and to develop multi-directional cultural exchanges and stronger relationships between countries. 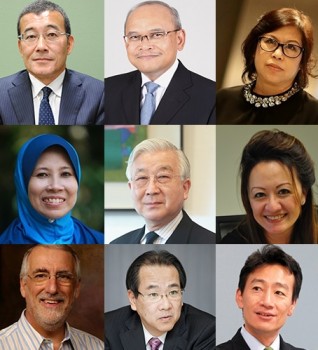 Culture is an essential part of each country, region, and race. With recently growing economic globalization, the importance of mutual understanding between different cultures with respect has been rapidly increased. Particularly in Southeast Asian countries, which consist of multiple races, it is fundamental to mutually understand the diverse culture in order to encourage a positive interchange on the community level.

For many years in Japan, it is the corporations who have been promoting arts and culture, supporting multifarious cultures in different regions, and contributing to the international exchange through arts and culture. Japanese corporations have developed their own philanthropic methodologies by making great uses of their own business and management resources, and continued to promote the solutions to various social issues. These creative and unique activities, distinctive of private sectors, are more flexible than any cultural promotion policies lead by the national and local governments, and play the important roles of promoting the diversity and initiative of arts and culture. In the globalization of the market, it is a major responsibility for Japanese corporations to offer their knowledge, skills and methods for cultural promotion they have cultivated, as well as to achieve a global expansion of corporate philanthropy.

This series of conferences introduce a wide range of corporate philanthropic initiatives in Japan, and at the same time, it opens to the discussion in relation to the role of corporations in order to promote a social creation through arts and culture. Future goal of this series is to encourage a positive network spanning the entire ASEAN, aiming to establish a cultural promotion platform through constitutive exchanges and interactive projects through arts and culture; ‘KMK ASEAN’.

Organizer：
Association for Corporate Support of the Arts

●Pn. Yatela Zainal ABIDIN (CEO, Yayasan Sime Darby, Malaysia)For twenty years, she has engaged in corporate governance strategies and their implementation Sime Darby Group. Appointed to the Chief Executive Officer of the Sime Darby Foundation in 2010, the foundation particularly focuses on Education; Community & Health; Environment; Youth & Sports; and Arts & Culture. Also it focuses on initiatives that encourage the development of a vibrant arts community in Malaysia’s multi-cultural society; such as the support of ASWARA Dance Company by conducting nationwide tours to promote Malaysia’s cultural heritage, provision of sustainable livelihood for the performing artistes, and facilitation of opportunities for dancers to continue their studies and perform overseas. The foundation holds the bi-annual Yayasan Sime Darby Arts Festival, supports the Kuala Lumpur Performing Arts Centre. Received the Distinguished Patron of the Arts award from the Ministry of Tourism and Culture in 2012, and the Royal Medallion – Corporate award received from the king in January 2014 for its unwavering financial support of the art.

●Ms.Suan Hwee ONG
(Deputy Director, Arts and Culture Development Office, National Arts Council Singapore, Singapore)
Suan champions strategy formulation and planning of initiatives that are geared towards growing arts philanthropy in Singapore. She also oversees planning and administration of the annual Patron of the Arts Awards, Give2Arts.sg – Singapore’s only online donation portal dedicated to the arts, and the Cultural Matching Fund Secretariat. Prior to joining the council, Suan was a corporate communications professional, where she offered strategic counsel, drove business development and managed cross-practice teams for businesses’ communications needs across sectors in Asia and the Middle East. Suan is a practising ceramist who also enjoys foreign films and yoga.

●Mrs. Gridthiya GAWEEWONG (Artistic Director, Jim Thompson Art Center, Thailand)
Gridthiya co-founded independent arts organization Project 304 in 1996 after she received her MAAA in Arts Administration and Policy from the School of the Art Institute of Chicago, IL, USA. Now she’s doing her Doctor of Fine Arts, at Faculty of Fine and Applied Arts, Chulalongkorn University, Bangkok. Her curatorial projects address globalization, migration, subculture and small narratives raised by contemporary artists from Thailand and beyond. She has organized exhibitions such as ‘Under Construction’ (2002, Tokyo), ‘Politics of Fun’ (2005, Berlin), co-curated ‘Saigon Open City’ (2006–2007, Vietnam), ‘Unreal Asia’, thematic program for the 55th Oberhausen International Film Festival (2009, Oberhausen). She was invited to curate exhibition of artists from Thailand overseas such as ‘Between Utopia and Dystopia’ (2011, The Museo Universitario Arte Contemporáneo, Mexico), ‘Primitive’ (2011, Apichatpong Weerasethakul) and ‘Missing Links” (Jim Thompson Art Center, 2012). She also involved with building up network among Asian and global art community by joining seminars, conferences and conducting workshops and contributed her essays to independent art magazines from Asia and beyond.

●Mr. Hario SOEPROBO (President Director, First State Investment, Indonesia)
Hario has a Management background from University of Indonesia and attended many courses at Citibank, Pillsbury Madison & Sutro, Barclays Bank, Commonwealth Bank and a short course at INSEAD, Fontainebleau. Hario was the Chairman of PT Bahana TCW Investment Management, another Asset Management company in Indonesia. He started his job at Bank Niaga, a commercial Bank in Indonesia, as a Corporate Banking officer before he assumed the job as Investment Banking Group Head and General Manager of Bank Niaga in Los Angeles. He has extensive experiences in Corporate Banking area, Investment Banking and Asset management business. PT First State Investments Indonesia is a leading Investment Management company in Indonesia, and a part of Colonial Global Asset Management (CFSGAM) a wholly owned subsidiary of Commonwealth Bank of Australia.

◆ Moderator Profile
Mr. Mitsuhiro YOSHIMOTO
(Director, Center for Arts and Culture, NLI Research Institute/ Director, KMK, Japan)
His research areas are cultural policy, operation and evaluation of cultural institutes, mecenat, art NPO, creative city. Since 1980s, Yoshimoto has been playing an active role in developing culture institutes such as Tokyo Opera City, the National Art Center and Iwaki Alios, as well as in consulting artwork plan of Tokyo International Forum. He has served many positions such as a member of cultural policy group, Cultural Council, a committee member of Tokyo Council for the Arts, a chairman of Creative City Yokohama Promotion Committee, and a lecturer at Tokyo University of the Arts. He is the author of ‘Rethink, Cultural Policy (2008)’ and ‘Art Strategy City EU: Japan’s Creative City (2006)’.